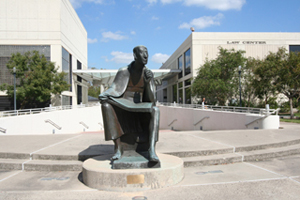 The University of Houston Law Center is the preeminent law school in the fourth largest city in the nation and enjoys a great reputation among the many law firms in Houston's large legal market as well as throughout the state of Texas.  As a result, the school is a great option for applicants with hopes of practicing law in and around Houston.  Residents of the state of Texas should also give Houston Law serious consideration, as the school's public standing allows it to offer an impressively low rate of tuition to state residents.

With up to 3,500 total applicants petitioning for entry into the full-time and part-time divisions of the school, the University of Houston Law Center has a highly selective admissions process. For the full-time division of the 2008 entering class, 2,999 applications were received by the school, 882 of which were accepted, with 255 of those accepted matriculating at the school. The LSAT scores for the full-time division of this entering class at the 25th and 75th percentiles were 157 and 163, while the undergraduate GPAs of the class at the same percentiles were 3.13 and 3.67.  Generally speaking, applicants with numbers that fall within these ranges should be competitive in future application cycles at Houston Law, while those with numbers above these 75th percentiles will have a solid chance at merit scholarships. Applicants with numbers below these 25th percentiles, on the other hand, will have a tougher time gaining admission to Houston Law, and should consider also applying to the school's part-time division. By applying part-time, applicants with relatively low numbers can enter a less competitive admissions process, and if accepted, can transfer to the full-time division after successfully fulfilling academic requirements.  All applicants, regardless of their numbers, can improve their chances at admission by highlighting in their application diversity that they could offer to the student body of Houston Law, as the school aims to put together a student body that is diverse in race, experience, and background.

As mentioned in the introduction, the University of Houston Law Center is able to offer a low rate of tuition to Texas residents because it is a public institution. For the 2009-2010 academic year, Texas residents enrolled in the full-time division paid $21,030 in tuition, while non-residents were charged $28,440. The school does its part in helping students with these expenses by providing grants and scholarships in varying amounts to more than half of the student body.  Generally, it is hard for non-residents to gain Texas residency, so non-residents should plan on paying the higher, non-resident tuition for all three years. 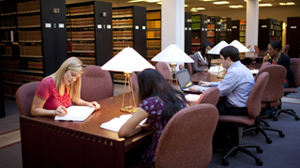 During their first year at the University of Houston Law Center, students take 30 credit-hours, mostly comprised of standard foundational courses such as Contracts, Property, and Torts. Following this first year, students are mostly free to choose from among more than 200 elective courses to fulfill their 90 credit-hour degree requirement.  Courses are available in numerous areas of the law, among them Business and Commercial Law, Family Law, International Law, and Tax Law.   Of particular regard are the law school's programs in Health Law and Intellectual Property Law, which are both consistently ranked amongst the top five in the nation.  Aside from required and elective courses, Houston Law students are offered many chances to gain practical lawyering experience through the school's clinical programs. Among these programs, which are supervised by the school's faculty, are the Immigration Clinic, Transactional Clinic, Health Law Externship, and the Consumer Law Clinic. Students can also take their legal education outside of the classroom through Houston Law's moot court and mock trial teams, which participate in national and international competitions, and also through participation in one of the school's several academic law journals. Lastly, students interested in joint-degree opportunities can choose from among JD/MBA, JD/PhD, JD/MPH, and JD/MA programs.

Houston is a vibrant city that is home to numerous restaurants, bars, and nightclubs at which students can unwind at night, as well as many museums, parks, and shops that students can browse in the daytime.  Students at the school also have plenty of opportunities to socialize with their classmates through social events hosted by the Student Bar Association, including weekly "arbitrations" in which beer kegs are heavily involved.  In short, the facilities and location of UH Law Center leave a lot to be desired, but the city of Houston and the student body of the school provide many opportunities for relaxation and socialization and ensure that students are able to make the best of their situation. 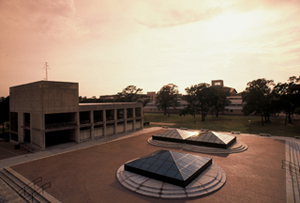 Undoubtedly, employment prospects for students of the University of Houston Law Center are strongest in the state of Texas, and are significantly weaker outside of the state.  Up to 90% of a typical UH Law Center graduating class stays within the state of Texas to begin their practice of the law, and many law firms from around the state visit the school's campus each year to interview students. Typically, these interviews are most fruitful for students ranked near the top of their class, and students ranked lower will likely have a tougher job search and must rely more heavily on the school's career services office. Students with hopes of securing employment outside of Texas will also have arduous job searches, and will likely find the school's large alumni network to be an invaluable resource. All in all, about 95% of UH Law Center graduates are typically employed within 9 months of graduation, with up to 65% choosing to enter the private sector. For graduates of the Class of 2007, the median first-year salary in the private sector was $90,000.

On the Texas bar exam, graduates of the University of Houston Law Center generally perform at a higher level than the overall state average.  On the Class of 2007's administrations of the bar in Texas, 90.5% of UH Law Center grads taking the exam for the first-time passed, compared to an overall state passage rate of 84.2%. 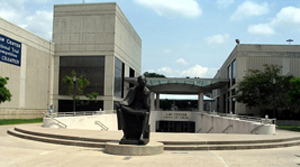 The University of Houston Law Center is the leading law school in one of the largest legal markets in the nation, and provides its students with great job prospects in and around Houston.  For applicants hoping to find employment in this area, as well as for Texas residents, who can attend at bargain rates, UH Law Center is a great place to earn a legal education.