The University of Oklahoma College of Law

Gaining admission to the University of Oklahoma College of Law is about what you might expect from a school of its ranking. Although USNews claims that there are no longer any Tier 2 law schools, OU Law is ranked 71st, placing it squarely in the middle of what used to be called the Second Tier (schools ranked 50-100). The numbers it takes for an applicant to get in to OU Law are about on par with those required by peer schools - with medians for admitted applicants at OU are 3.57 for GPA and 157 for LSAT.

Although admission to OU is relatively competitive--as of last reporting they accepted 29.0% of applicants, and over the past seven years that figure averages only 31.5%--applicants with numbers at or above the previously mentioned medians can feel relatively confident regarding their chances for admission. Applicants can further bolster their chances can be bolstered by giving special attention to their personal statements, resumes, and ensuring that their application comes flanked by top-quality letters of recommendation. 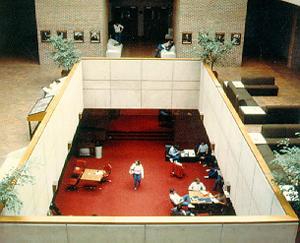 University of Oklahoma College of Law

Once admitted, students then must deal with the issue of paying for their legal education at OU Law. Although (as is the case for nearly all state law schools) tuition ranges widely between in-state and out-of-state students, tuition at OU Law is still a bit of a bargain. Tuition is charged on a per-credit-hour basis, with a different rate for both in-state and out-of-state students. As listed in US News, 2008-2009 annual tuition amounted to $16,766 for Oklahoma residents and $26,695 for residents of other states. It is, however, possible to petition for residency during one's career at OU Law, making the likelihood of paying out-of-state tuition all three years not very great.

These tuition figures are very reasonable, and should be considered a major draw for students looking to finance their legal education with interest-bearing loans, or those interested in pursuing lower-paying legal careers such as government or public interest work. In addition to tuition and university fees, there is the issue of room and board. While it's nothing compared with NYC or San Francisco, cost of living is a little higher in Norman than the surrounding areas because it is a college town and thus landlords know they've a captive audience of renters waiting to snap up their properties. OU Law students can plan on budgeting another $9,000-$10,000-a-year for food and housing.

It is not astonishing that the majority of OU Law graduates opt to take the bar exam in the state of Oklahoma. In this effort, their success rates are astonishing: Most recently, 94.0% of OU Law grads passed the bar on their first attempt, and over the past seven years the average first-time bar passage rate for OU graduates is 92%. During this time, OU Law grads were 7.2% more likely to pass the bar than all first-time takers. In short, for those wishing to practice in Oklahoma, the bar examination is not likely to prove a significant impediment.

Employment prospects for OU Law grads are largely regional, but the school enjoys a very strong reputation in Oklahoma (where it is unsurprisingly the best law school in the state) and, to a slightly lesser degree, the whole of the lower Midwest. The majority (59%) of OU Law grads go on to work in private practice, with significant portions finding jobs in businesses (17%) or government work (13%). Clerkships and academia (combining for 8% of the most recent graduating class) do not make up a significant portion of graduates, so OU Law is likely not the best choice for an applicant with his or her heart set on one of these choices.

First year required courses consist of much of the same classes as you'll find on any 1L's roster across the US: Civil Procedure (I and II), Contracts (I and II), Criminal Law, Legal Writing and Research (I and II), Property and Torts (I and II). After that, students can choose their focus and complete a minimal number of upper division academic requirements. The student-to-faculty ratio is a decent 11.9-to1, suggesting that OU provides a more intimate atmosphere than its status as a gigantic state university might initially imply.

OU has a very strong Native American Law program. They pride themselves on keeping Native American Law not as a stand-alone program, but rather as something integrated in the overall curriculum, especially with regards to contracts and constitutional law. Students with an interest in Native American and civil rights law or who wish to practice tribal law would find a very suitable law school to pursue their goals in OU Law.

Additionally, OU Law offers a number of joint degrees for students with strong interests and/or a desire to pursue a career in an area not strictly relating to law. There is a JD/MBA as well as a JD/MPH (Masters in Public Health) and a number of other masters degrees in the humanities that can be combined with the OU JD.

Norman, Oklahoma is a small (population just over 110,000 as of the most recent census estimate) Midwestern town, and a quintessential "college town." Life in Norman is very much centered around OU, so OU Law students should find themselves with plenty of bars and nightlife options suited for individuals of their age groups and interest range. Students with their hearts set on the cosmopolitan major-city experience offered by NYU or University of Chicago will no doubt be disappointed by Norman, but those who want enjoy small town life are sure to be delighted.

Fans of college sports will also be right at home in Norman, OK. The Sooners field a football team that plays national championship caliber football almost every year, and their basketball team is usually a competitor as well. OU-Texas, the so-called Red River Rivalry, is one of the most storied rivalries in all of college football.

The combination of reasonable tuition, stellar bar passage, and almost unmatched job placement within the state of Oklahoma makes OU Law a nearly unbeatable choice for applicants looking to live and work in the Sooner State. It is also a very fine place for students interested in Native American law. The lower-than-usual private sector salary median and regionally limited job placement options, however, do indicate that students looking to practice law on either coast would be wise to look elsewhere.