The University of Kansas School of Law 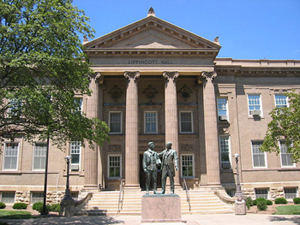 The University of Kansas School of Law, recently ranked 68th best in the Nation by US News & World Report, is a strong regional school and a good choice for Kansas residents looking to practice in the state and take advantage of low in-state tuition.

Gaining admission to the University of Kansas School of Law can be a competitive process, as over the past seven years they've typically accepted roughly 36% of applicants. Statistics of accepted applicants are roughly concurrent with what one might expect of a similarly ranked law school. The medians of those accepted to the University of Kansas School of Law are a GPA of 3.50 and a 162 LSAT score. Anyone with numbers above those medians, especially Kansas residents, should feel comfortable in their being able to secure admission, but of course "soft factors" such as the personal statement, resume, and so forth do play a role and can assist applicants with less-than-stellar numbers.

As is the case with the vast majority of public universities, tuition differs depending on state of residency. For non-Kansas residents, tuition runs a steep but still reasonable $33,067 a year. For Kansas residents, on the other hand, tuition is only $19,623 a year, causing USNews & World Report to rate the University of Kansas Law School as one of the best buys in the nation (assuming in-state tuition, it's worth noting that one can attend all three years of University of Kansas School of Law for approximately the cost of ONE year at a top private school such as USC). On top of these fees, students can add another $10,000 or so for room and board, bringing the total cost to about $30,000 for in-state students and $42,000 a year for out-of-staters when personal expenses and transportation are included. 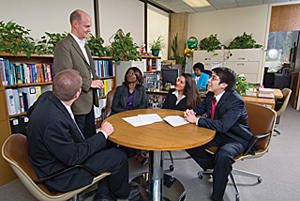 Given that the University of Kansas Law School is largely considered to be a regional school, the majority of graduates opt to take the Kansas Bar Exam--and the vast majority tend to be successful.  The latest reported state bar passage rate is 93.1%, slightly better than the statewide average of 90.1%. However, it should be noted that this gap has not always been so narrow, as out over the past seven years University of Kansas School of Law graduates pass the bar at a rate more than 4% above the state average.

Employment prospects, on the other hand, are not always as rosy as the bar passage rates might indicate. Only 65.9% of graduates have any sort of employment secured at graduation, although the figure does jump up to 94.3% nine months later (still, nine months can be a long time to look for a job when one is needing to pay off a hefty chunk of law school loans). Average starting salaries are also, at first blush, unimpressive: $65,000 for those going into the private sector and $44,665 for those in public service work. However, these stats need to be examined further: Balanced against the rock-bottom in-state tuition and the low cost of living in Kansas relative to other legal markets such as California and New York, this money could go a long way.

Students considering The University of Kansas School of Law should take these statistics into careful consideration before attending--the low average starting salaries imply that very few of Kansas Law's grads find themselves working ritzy $100,000-a-year+ "biglaw" jobs. This could be because of a relatively low cost-of-living, though it is worth noting that the degree does not travel very well out of state; neighboring states like Oklahoma and Nebraska have their own similarly-ranked law schools creating stiff competition for legal jobs within the immediate region. Nevertheless, for Kansas residents who are sure that they want to make the Sunflower State or western Missouri their home and workplace, University of Kansas Law School can be an excellent option. 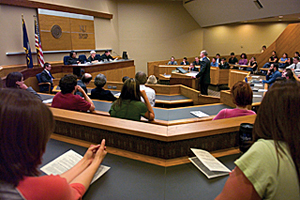 The University of Kansas Law School boasts solid academics for a school of its ranking. It is home to the Wheat Law Library, which is the largest law library in the state of Kansas and houses over 350,000 different volumes. It offers a number of joint degree programs, including both the usual suspects (JD/MBA) and some that one does not often encounter such as the JD/Master in Indigenous Nation Studies and the JD/Master of East Asian Languages and Cultures programs. The University of Kansas School of Law also offers a number of certificate programs including an Environmental and Natural Resources Law Certificate Program and the Tribal Lawyer Certificate Program. The school puts out two legal publications: The Kansas Journal of Law and Public Policy and the Kansas Law Review.

First-year classes are similar to what one would find in most other American law schools. 1Ls study civil procedure, torts, contracts, criminal law, property, constitutional law, and legal writing. 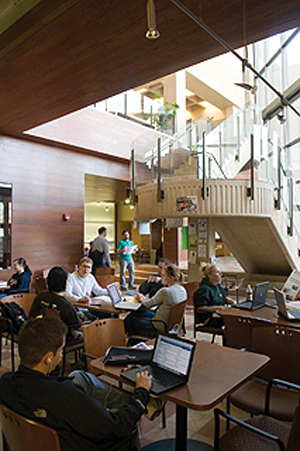 Although it is the county seat of Douglas County, students seeking fast times in a big, cosmopolitan city will likely not find Lawrence, Kansas (population: 90,520) to be their cup of tea. Lawrence is a classic "college town" and, despite the absence of intimidating urban bustle, is a fun and unique place to make one's home for three years. As is often concurrent with college towns, Lawrence is an oasis of progressive politics in an overwhelmingly red state (Douglas County was one of only 2 in the state that went for Kerry in 2004 and one of only 3 for Obama in 2008). Lawrence is known for its local art, music and culture: It is home to the Wakarusa Music and Camping Festival and in 2005 the New York Times called Lawrence "the most vital music scene between Chicago and Denver."

Additionally, KU is a fantastic place for sports fans. The state is home to MLS's Sporting Kansas City, and the Kansas City Royals and Chiefs are just across the border in Kansas City, Missouri. In addition, KU plays in the always competitive Big 12 conference and the University boasts a legendary basketball team with one of the best home-court advantages in the country.

The University of Kansas School of Law is a fine choice for students who wish to live and practice close by and take advantage of low in-state tuition. Prospective students should, however, be warned that the school does not boast overwhelmingly impressive employment and salary statistics, a fact which should be taken especially into consideration by those who would pay out-of-state tuition of finance their legal education with interest-bearing loans.

Interview: Jacqlene Nance, Director of Admissions at the University of Kansas School of Law 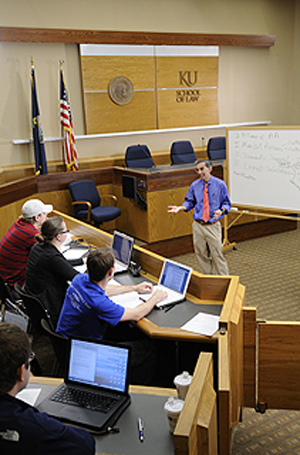