Founded in 1899 and accredited by the ABA in 1951, John Marshall Law School is located seconds away from Dirksen Federal Courthouse in the famous Chicago Loop. John Marshall has many regionally-known alumni, including Hon. Timothy C. Evans, chief judge of the Circuit Court of Cook County. Its graduates have earned the law school a respectable reputation in law, government, business, and judiciary offices throughout Chicago. 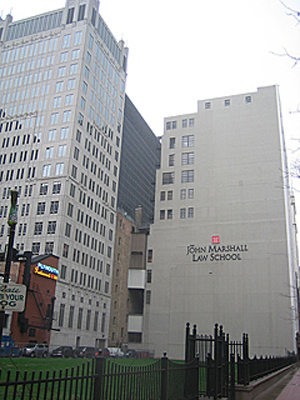 The numbers required to gain admission to John Marshall are a bit more competitive than most Tier 4 law schools. The 2009 full-time class's 25th to 75th percentile LSAT range was 150 to 156, and its median was 156. The GPA range was 3.00 to 3.53, and its median was 3.25. About 48 percent of 2,738 full-time applicants were accepted in 2009, but this should not discourage students with lower numbers from applying. Other parts of the application package, such as the personal statement and unique life experiences, may give candidates a boost.

Tuition, which is calculated per credit hour, depends on a student's schedule. Students should expect to pay $35,380 for a full-time load and $25,300 for a part-time load. Students who intend to finance their legal education through loans need to give these figures some consideration. Average debt for graduates in 2008 was among the highest out of ABA-approved law schools at $124,015.

John Marshall has an average 1L class-size of 75 people, about average compared to other Tier 4 schools. With 69 full-time faculty members, the student-to-faculty ratio is an impressive 14.4 to 1. First-year students are required to take a number of courses including civil procedure, contracts, torts, constitutional law, property, and lawyering. Current students say the classes are difficult and the grading curve is harsh. A whopping 17.7 percent of students do not return for a second year, and 7 percent do not return for their third year. Even after making it that far, 2 percent of 3Ls also leave the school before graduation. Still, current students say that professors at John Marshall are intelligent, approachable and more than willing to help you.

Students at John Marshall seem quite happy with their decision to attend. While the school itself does not offer on-campus housing, students generally have no trouble finding quarters in Chicago. Included in tuition is a semester-long pass for the Chicago Transit Authority public transit system, a boon to students who commute. Students say the dining on campus is adequate and that campus facilities need improvement. Many of the law school's attendees love Chicago. They say there is always something to do, whether it's a social event organized through the law school or by their peers. Those accustomed to warm weather will likely find their first Chicago winter to be an educational experience in its own right.

About 88 percent of John Marshall students were employed within nine months of graduation. Nearly 94 percent of those graduates were employed in-state, evidence of the school's regional nature. These graduates earned a median of $75,000 in the private sector and $55,316 in the public sector. Students at John Marshall say the career services department is good but maintain that in order to be considered for a job at a prestigious firm, you must be in the top 15 percent of your class (and more likely in the top 5 percent). Students agree with the stigma that many John Marshall students go into lower-paying public-service jobs. But they remain optimistic. They claim that any job is possible out of John Marshall, though it depends on where you place in your class and how well you interview.

In 2008, 87.9 percent of John Marshall graduates passed the Illinois state bar exam. This bar passage rate was slightly worse than the state's overall average of 90.9 percent. Graduates from John Marshall must go head to head in the job market against graduates from better-known schools like University of Chicago, Northwestern, University of Illinois and Chicago-Kent.

John Marshall has some lackluster numbers when it comes to starting salaries. Unfortunately for graduates, their debt also borders on unmanageable. Many students in 2008 found themselves with a job that paid less than $75,000 and a debt slightly above $124,000. Since John Marshall is a Tier 4 school, graduates will find their success is limited to Illinois and, in some cases, to Chicago. Overall, the school can be a decent option for students. The prospects of finding a great-paying job are low, however,and this is a problem given the amount of loans incurred by graduation day.