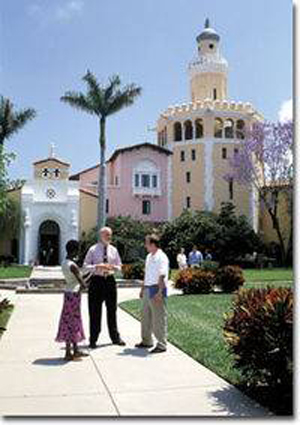 Offering a tropical setting and some outstanding academic programs, the Stetson University School of Law is a diamond in the rough. It is still a low-ranking, regional institution however, and students should be aware of the limitations that come with a Stetson Law degree.

Stetson Law School also accepts applicants on a part-time basis. Admissions standards are less demanding compared to those of the school's full-time program. GPA's ranged from 3.12 to 3.59 for the 25th to 75th percentiles, and LSAT scores ranged from 151 to 156. The part-time medians were 3.39 and 153.

Stetson Law School is one of the cheaper private schools in the country. Full-time students pay only $31,420 per year, while part-timers pay $21,700. Room and board is also quite cheap, with the average student spending roughly $10,000 annually. These figures, combined with book costs and other miscellaneous fees, put the annual cost of attendance at roughly $47,000 for full-time students and 37,000 for part-timers.

Though the cost of attendance is low, there will always be students who cannot incur the financial burden on their own. In fact, 86% of Stetson students borrow money to finance their education. The school's financial aid office does its part, however: 8% of the entering class of 2009 received grants equal to or higher than the cost of tuition. Overall, the median grant amount for full-time students was a very helpful $15,250, according to USNews. Even so, graduates who took loans leave the school with a rather high $116,184 in debt. 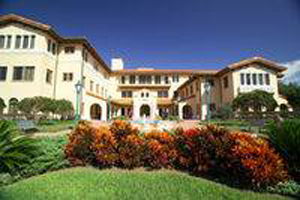 For those Stetson graduates who do pass the Bar, employment prospects look good. Though the school does not report its time-of-graduation employment rate (most likely because it is quite low), 95% of graduates are employed within nine months of graduation in some type of job.

Roughly 80% of those who graduate from Stetson Law School end up practicing in Florida. While the warm weather and beautiful beaches of the Sunshine State are sure to have convinced some students to stay, the truth is that most graduates would struggle to find work outside of the state if they tried. Stetson is a regional law school, meaning that its reputation does not extend well beyond the state and hiring attorneys in other regions are more likely to choose graduates from schools that are better known in their own region.  However, as evidenced by the roughly 20% of Stetson grads who did leave Florida last year, it is not impossible to find work elsewhere. But those who do leave do not go far. In fact, only 9% left the South Atlantic region.

Stetson graduates diversify themselves more in their chosen fields of law than the regions in which they practice-though not by much. Over 60% Stetson grads enter private practice; 11% found government jobs; and the remaining graduates divided themselves among public-interest fields (7%), business (11%), and judicial clerkships (3%), and various other fields (4%).

Those who entered law firms or business earned the most, enjoying a median starting salary of $84,000 (with a range of 65-95K for the 25th to 75th percentiles). Stetson graduates working in public interest started with a median of $45,500, according to USNews.

Given that Stetson Law School is listed as a tier 3 law school according to US News, many are surprised to learn that the school's Legal Writing program has been ranked sixth in the country and its Trial Advocacy program has been ranked first, according to the USNews specialty rankings. Undoubtedly, these programs help to prepare Stetson's pool of future lawyers for the rigorous career that lies ahead.

Stetson Law's ability to prepare its students goes well beyond the two above mentioned programs. The school also offers certificates of concentration in International Law, Elder Law and Higher Education Law. Stetson students can also choose study law in foreign countries, like China, Spain, Germany, and Argentina, among others.

Stetson is not a Top-14 law school, and it seems safe to say that it never will be; regardless, the school's top-ranked programs, combined with the opportunities afforded to students through clinics, internships, and study abroad programs, go a long way in equipping students for a long and successful career in law. Students are encouraged to go the extra mile, however, as they will need to work to take advantage of such opportunities.

Occupying a former resort hotel in Gulfport, Florida, the campus of Stetson Law is truly unique.  Students should expect plenty of sunlight and tropical scenery when they come to Gulfport, which is located on Florida's Western Coast, near St. Petersburg.

Gulfport is particularly known for its attraction of artists and craftspeople. On the first Friday and third Saturday of every month, a festival known as Art Walk brings out street performers and artists who inject a sense of culture and creativity into the streets of Gulfport. With cool breezes coming off the beach and people out enjoying each other's company on Florida's warm nights, it is during these times that students are most likely to pat themselves on the back for choosing Stetson Law School.

What's more, with public beaches, bike trails, and parks in abundance, Gulfport offers students plenty of opportunities to get out and de-stress. The average temperatures in the 70's and 80's don't hurt either.

Tuition is low, quality-of-life is high, and many of the academic offerings are outstanding. Stetson University School of Law outperforms its ranking on a number of counts. Career prospects are not great however, and prospective students should keep this in mind as decision-time nears.