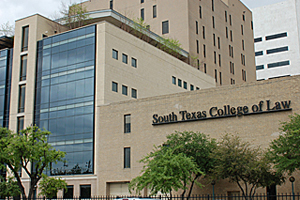 Founded in 1923 and accredited by the ABA in 1959, South Texas College of Law is Houston's oldest law school and the third-oldest law school in the state. South Texas Law's mission is to provide "accessible legal education, distinguished by its excellence, to a diverse body of students committed to serving their communities and the profession." [1]

In 2009, full-time matriculating students boasted a median LSAT of 153 and a median GPA of 3.30. Medians for part-time students were 152 and 3.02, so students below the full-time medians should not be discouraged from applying. The acceptance rate in 2009 was about 47 percent and total enrollment was 434 students. Current students say the admissions process is straightforward, with a strong emphasis placed on LSAT scores and GPAs. The admissions office is described as patient, friendly and helpful.

Tuition is not that steep. Full-time tuition runs just under $25,710, while the bill for part-time tuition comes in a bit over $17,340. In 2008, South Texas Law provided about 33 percent of its students with some form of grant aid. The median amounts of aid were $3,400 per full-time recipient and $1,900 per part-time recipient. Because of this relatively low grant aid, 2009 graduates incurred an average of $93,494 in debt. Unlike many similarly-ranked schools, South Texas Law offers a loan repayment assistance program for its students.

South Texas Law typically lectures its first-years in class sizes of 95 students. The law school has 113 total teaching faculty members and a high student-to-faculty ratio of 20 to 1. First-year students all have the same required courses, which include legal research and writing, contracts, torts, civil procedure, criminal law, constitutional law and property. Students say the workload is immense and the grading curve is rigorous. These students seem to appreciate the open-door policy of their professors, who reportedly are willing to talk with students and help them with just about anything. Due to the harsh grading curve and rigor of the curriculum, approximately 6 percent of students do not make it past the first year.

Located in downtown Houston, South Texas Law has all of the amenities of a large city. Students take advantage of the fact that Houston has a lower cost of living than other major cities in the United States. The law school is not affiliated with an undergraduate school and, accordingly, on-campus housing is not available. Still, cheap housing is widely available in downtown Houston, within walking distance of the law school.

The campus facilities are described as top-notch and very well maintained. With a plethora of bars and restaurants minutes from the law school, there is never a shortage of activities at South Texas Law. More importantly, the law school is conveniently located near the legal and financial districts of Houston, making commuting to and from internships a breeze. The community at the law school is described as friendly, cordial and close-knit. There are a number of groups and activities sponsored by the Student Bar Association that help promote a healthy social life for law students. Overall, students seem quite pleased with the quality of their lives in Houston and at the law school. 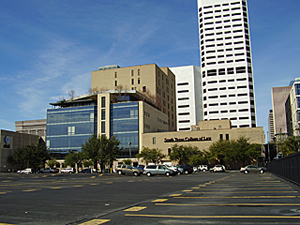 Approximately 85 percent of recent graduates were known to be employed within nine months after graduation. Of those, almost all of them were working in Texas. They earned medians of $71,000 in the private sector and $52,000 in the public sector. These salaries compare favorably with those of other Tier 4 schools.

Current students at South Texas Law say the degree has strong regional value. If a student wishes to find a job in Texas, the Career Resources Center will helpfully set the student up with on-campus and off-campus interviews with Texas-based firms. For students wishing to work outside of Texas, the legwork and networking is almost entirely up to them. Being so close to Houston law firms is helpful for securing internships and employment. Still, it is prudent to remember that even though Texas has a bustling legal market, there is a high level of competition for big law firm jobs from higher-ranked schools like the University of Texas-Austin, Southern Methodist University, and the University of Houston.

In 2008, graduates passed the state bar exam at a rate of 89.2 percent. This bar passage rate was nearly 5 percentage points higher than the state average, so it seems South Texas students are well-prepared.

South Texas Law offers a number of draws for prospective students. Its location in downtown Houston is helpful for reasons related to quality of life and potential employment. Despite being a Tier 4 law school, it offers a private-sector median salary that is comparable to schools on the lower end of the Top 100. That salary, matched with the relatively low cost of living in Houston, paints a rosy picture for South Texas graduates. The school's regional power is a blessing for Texas-lovers, but a bane for those looking for a career outside of the state. Students will likely incur over $90,000 in debt, but also have a good chance at a decent-paying job or school-supported repayment to help manage this debt. Overall, South Texas Law is a reasonable choice for students looking to make a career in Texas.

South Texas College of Law’s Advocacy Program has fielded national championship teams consistently for more than 30 years, a history unrivaled by even the most legendary athletic institutions.

The trophies amassed by our interscholastic advocacy teams symbolize more than decades of hard work and victories by the law students who compete anonymously in moot court and mock trials around the nation. They represent the South Texas tradition of unparalleled commitment to advocacy education and our leadership in developing outstanding lawyers who graduate with the skills they need to represent clients in the courtroom from day one of their professional careers.

The Advocacy Program also builds champions in the universal sense of the word, encouraging students to realize their full potential as exemplary individuals who uphold, ardently support and defend worthwhile causes, often aiding others in a marginalized society. While competition wins are a measure of our success, the ultimate victory, the thing that ultimately benefits communities and the world, is valiant behavior itself.

For three decades, South Texas College of Law has consistently been listed at or near the top of every advocacy program ranking. Currently, the program is ranked #5 in the "U.S. News & World Report" rankings for trial advocacy. [2]