The Arizona State University College of Law enjoys the distinction of being the only ABA-accredited law school in the large Phoenix metropolitan area. This distinction enables Arizona State Law's students to benefit from close access to many of the state capital's legal and professional resources, and also secures for them tremendous job prospects in the city's vast legal market.  At the same time, the school's impressive student/faculty ratio, which ranks among the best in the nation, enables students to get the most out of their legal education through frequent interaction with Arizona State Law's reputable faculty corps.  Especially for Arizona residents, who pay a low in-state rate of tuition at the school, the Arizona State University College of Law is a great place to pursue a legal education.

With around 2,500 applicants vying for a spot in an entering class that consists of fewer than 200 seats, Arizona State Law's admissions committee practices a high level of selectivity when granting admissions offers. During the 2009 admissions cycle, only about 750 of the roughly 2,500 applications received by the school were approved, and 187 of these admitted applicants chose to matriculate at Arizona State Law to form the Class of 2012. The LSAT scores of this class at the 25th and 75th percentile were 158 and 163, respectively, while the undergraduate GPAs at the same percentiles were 3.3 and 3.8, respectively.  Generally speaking, applicants with numbers that fall within these ranges can expect to be competitive in future admissions cycles at Arizona State Law. Hope is not lost, however, for those with slightly lower numbers, as Arizona State, like most other reputable law schools, aims to put together entering classes diverse in ethnicity, background and experience. Thus, applicants who are able to demonstrate through the application their ability to offer this sort of diversity to the student body of Arizona State Law will likely increase their chances of acceptance.

In terms of tuition, Arizona State School of Law is a bargain for residents of the state of Arizona.  For the 2009-2010 academic year, in-state tuition at the school was $19,225, while tuition for non-residents was $32,619. It should be noted that non-residents who can prove their intent to reside indefinitely in the state of Arizona after graduation should, in most cases, be able to achieve resident status at the school following their first year. 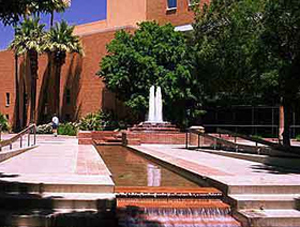 As is standard practice in American law schools, students at Arizona State Law enroll in required classes during their 1L year, including Criminal Law, Torts, and Property. After this first and most rigorous year, students must pass 3 more requirements, and are thereafter free to choose from among up to 140 elective courses to complete their 88-credit JD degrees.  The fact that about two-thirds of these upper level electives contain less than 20 seats, combined with the school's impressive 10 to 1 student to faculty ratio, ensures that Arizona State Law students are able to establish close contact with classmates and faculty in courses specific to their areas of interest.  Aside from required and elective courses, students can also pursue JD/MBA, JD/PhD and JD/MD programs at Arizona State Law, and are also able to partake in several clinical opportunities in various areas.  In addition, the school houses the Center for the Study of Law, Science, and Technology as well as an Indian Legal Program, both of which are enjoy national prominence in their respective fields.  Finally, select students can participate in prestigious law journals at Arizona State Law, and those wishing to take their legal education beyond American borders can do so through the school's various study abroad programs.

Whereas students at most law schools brace for icy winters every year, Arizona State Law students have been known to enjoy midnight swims throughout January and February.  Of course, late summer months in Phoenix are usually marked by temperatures in the triple figures, but in general, the weather of the area is considered a great draw for most Arizona State Law School students.  Another draw of the Phoenix area is its variety of bars, clubs, and restaurants, which allow busy law students the opportunity to unwind after a long week of classes, usually by way of the weekly bar reviews hosted by the school's student government. Housing options in the area are plentiful and affordable, for the most part, and law students are generally able to find suitable apartments near the law school campus. Public transportation, on the other hand, is not as efficient as in other large metropolitan areas, and according to many Arizona State Law students, an automobile is practically necessary for life as a law student in Phoenix.  In sum, the quality of life for students at Arizona State Law promises to be high, mainly due to the great year-round weather of the Phoenix area. 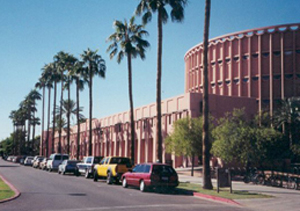 For students of ASU Law School, employment prospects in Phoenix and throughout the state of Arizona and the Southwest region are tremendous. Many top firms from this area visit the campus each year to interview students, and about 20% of ASU Law School students secure jobs through these on-campus interviews each year.  Students for whom on-campus interviews are not as fruitful can look to the school's career services office and its alumni network, whose combined efforts contribute to an impressive rate of employment for graduates: usually more than 90% within 9 months of graduation.  Of course, employment prospects for ASU Law School students dim as one looks outside the Southwest area, and students hoping to work in such areas will likely have to put in a considerable amount of legwork in their job search. The vast majority of ASU Law School students stay in the Southwest to practice law, and very few begin their law careers in the northern states.

In terms of bar passage, graduates of Arizona State Law have performed well in recent years. For the Class of 2007's administrations of the exam in the state of Arizona, approximately 83.5% of Arizona State Law grads taking the exam for the first time successfully passed, compared to an overall state passage rate of about 78.8%.

For residents of the state of Arizona, as well as applicants hoping to secure employment in the state and its surrounding region, the Arizona State University College of Law is a great place to pursue a legal education. Applicants who choose to enroll at the school can look forward to a sunny three years of law school and can count on great job prospects in Phoenix and all of Arizona after graduation.