Howard's law school offers an awesome array of professional opportunities for its graduates, considering its poor ranking by USNews and World Report.

Although Howard offers a wide array of career options to many of its graduates, gaining admission to the school does not require numbers far greater than those required by its third-tier peers. Their median LSAT score and GPA for matriculants in 2009 was 153/3.20. While these numbers do tend to fluctuate a bit from year to year, applicants with numbers at or above this level should feel competitive about their chances for admission, especially if their soft factors (resume, personal statement, letters of recommendation, etc.) are top-notch. While the numbers required to gain admission to Howard aren't staggering, admissions is still competitive. Most recently, of 2070 applicants, only 497 were accepted. This implies that, while GPA and LSAT are always of paramount consideration in law school admissions, the other factors in an applicants file weigh heavily on the minds of the Howard admissions committee. While Howard is a historically black university, applicants who are not African American will not be discriminated against in the admissions process, according to the school's Policy and Procedure on Equal Opportunity in Employment and Education Programs and Activities. 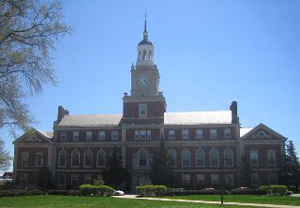 Once admission is gained, there comes that unique joy of all law students: Paying for tuition. Tuition at Howard is a relatively low $24,490/year, regardless of state of residency. According to Howard Law's website, one can expect that the total cost of attending Howard, including tuition, books, and cost-of-living expenses, will be roughly $44,200 a year. While a three-year law school bill for a school outside the top-100 might seem daunting, one should weigh carefully the career options afforded by a degree from Howard (which exceed those of many of its peers), the median starting salary of graduates (which is on par with a top-25 law school), and the fact that Howard offers a number of merit-based scholarships, ranging from $5,000 a year to more than full tuition, depending on the applicant's resume and numbers.

The curricular requirements at Howard are very much similar to those at any ABA-accredited law school (right down to the standard 1L milieu). Grading is done on a standard A-F system, and students are expected to maintain a C average or better. There are a number of options beyond the standard curriculum for Howard students to get involved with their legal education. One key program is the Institute of Intellectual Property and Social Justice, a center whose intent is to "use intellectual property law to advance social justice in the United States and the global community," making Howard a good choice for those with a strong interest in both IP and public interest law.

Howard features several student publications including the flagship Howard Law Review and The Howard Scroll (The Social Justice Law Review), as well as a moot court team, and a number of clinics including a Criminal Justice Clinic and an Alternative Dispute Resolution Clinic. Additionally, there are several student organizations, including one for Asian-Pacific students and another for Hispanic students, underscoring the fact that while Howard is a historically black university, being African American is by no means a requirement for receiving a quality legal education there.

What can be said for the quality of life when one studies law in Washington, DC? Being in the capital means being in close proximity to innumerable exciting internship/externship opportunities, not to mention three perennially mediocre professional sports teams (the Wizards--nee bullets--in the NBA, the Redskins in the NFL, and the Nationals of the MLB). DC is a major world city, and one is challenged to find an interest or passion that cannot be fruitfully pursued within the District. Having a car in DC can sometimes be a pricey hassle, but the good news there is that mass transit tends to be both thorough and reliable. Additionally, some areas of DC are notoriously unsafe, and caution must be used going from place to place alone at night or in unfamiliar areas. Other than crime (which is reported to be improving in recent years), the primary issue with DC is the very high cost of living. Applicants must balance this against the pros of a Howard education when assessing the prospect of spending three years in DC.

Bar passage statistics do not paint a fabulous picture of Howard University Law School. Since 2001, the state in which most graduates have opted to take the bar has alternated between New York and Maryland (mainly New York). In those states, during that stretch of time, Howard grads averaged a first-time bar passage rate of only 64.5%, a full 10.3% behind the statewide averages for those respective states. Most recently, the bar passage rate was 59% (in New York), 27% below the state average. There is really no favorable way to frame these statistics: Howard's graduates struggle with the bar exam, year after year.

Despite difficulties with the bar, however, Howard grads do somewhat well in the job market. Most recently, an impressive 72% were placed in jobs at graduation and the figure upped to 85% within 9 months. And the news gets even better: The most recently reported median full-time starting salary for a Howard graduate working in the private sector was $160,000, a staggering figure for a school outside the top-100. In fact, Howard's salary statistics would seem to place it on par with schools in the vaunted Top-14. This is because the array of "biglaw" jobs open to Howard graduates is very impressive. A whopping 551 law firms do on campus interviews (a primary means for law students to secure employment) at Howard, including 68 firms from New York, 66 from California, and 88 from DC. This points to the national reach of a Howard degree, and it bears mentioning that these are not minor firms. Wachtell, Lipton, Rosen and Katz, traditionally considered the creme de la creme of New York biglaw firms due to their generous starting salary and bonuses, does on campus interviewing at Howard, and they are known mainly for recruiting almost exclusively from the top-6 law schools.

Considered the star of the Historically Black Colleges and Universities, Howard offers a law school that, while not highly ranked, places graduates in some of the most elite firms in the country from coast to coast. For African-American and other underrepresented minority students, Howard afford opportunities not dissimilar to those of a top tier school.

In sum, Howard University Law School can be an attractive option to someone looking for a legal education that provides strong job prospects in a dynamic city environment.