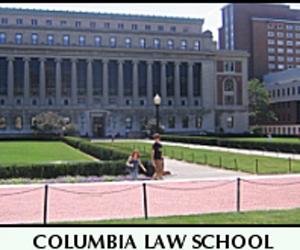 Established in 1858, the Columbia University School of Law is consistently considered to be among the top law schools in America. Given its location and reputation in New York City, its Ivy League affiliation, and its long history of academic excellence, Columbia's rank and prestige should come as no surprise. It is at the same time one of the most expensive schools in the country (with a total debt-financed cost of about $288,597) and one of the best for employment prospects (with a Law School Transparency employment score of 93.4%).

Applicants interested in Columbia should be prepared to face a highly selective admissions process.

Columbia's median LSAT score is 171 and the median undergraduate GPA is a 3.70. 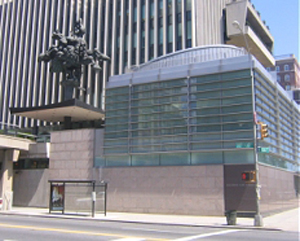 Applicants must submit an application form through LSAC, a personal statement, at least two letters of recommendation, a resume, and an $85 application fee (in addition to LSAC's $25 processing fee). Applicants who answer yes to certain questions in the character and fitness portion of Columbia's application form must also submit a letter from the dean or administrative officer about their disciplinary history.

Columbia does not have a set page limit for personal statements, but instructs that "a good guideline is two double-spaced pages, using readable fonts and margins."

We recognize that different programs may look for different qualities in such a statement, but at Columbia the content is entirely up to you; anything that you believe will express a sense of your background and aptitude for a legal career is fair game. …

A good way for some people to start the process is to write down everything that comes to mind as though you were writing for nobody but yourself. Jot down ideas about moments of great impact to you, accomplishments that fill you with pride, and broad ideas about what drives you to progress in whatever lies ahead. Once that is done, take a break—for a few minutes, an hour, or even a day. Then look back over your notes, zero in on the items that still grab you, and use those to organize your piece.

What you can rely on is the fact that how you express yourself will be noticed. Keep in mind that “personal” does not mean “informal”. Misspellings, grammatical errors, slang, and lack of discernable structure will make our jobs more difficult—especially in cases of otherwise exceptional applications (remember that good lawyers are detail-oriented). Do not simply rely on spell-check; proofread, re-read, and edit your work.

Columbia's application typically opens on September 1. Applications usually must be completed by February 15. The latest LSAT accepted for regular decision applicants is the December administration.

Columbia's review process begins in November and applications are usually reviewed in the order in which they are received and processed as complete.

In recent years, the largest number of acceptances have been released in January, according to data from MyLSN.

Early decision applicants may either be accepted, denied, or held for review in the regular pool.

Statistical analysis of data from Law School Numbers revealed that applicants do not receive a statistically significant boost by applying through the early decision program.

Every application is read by at least two admissions officers. Columbia began a pilot program for interviewing a random subset of candidates via Skype during the 2013-2014 cycle and plans to expand the interview program in future cycles.

Aside from the usual emphasis placed on an applicant's numbers, Columbia prides itself on the diversity of its student body and thus seeks out applicants with diverse backgrounds and experiences. Further, in a typical year, about 10% of Columbia's entering class consists of international students, which is high among elite law schools.

Applicants can use Columbia's status checker to tell when their application has been received and when it has been completed. Once the file is complete, however, applicants will not receive any further updates through the status checker. Acceptances will be sent via mail for domestic applicants and via email for international applicants. 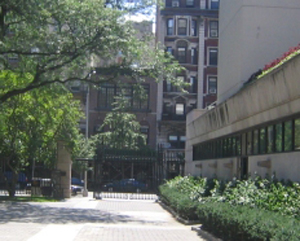 Seventy five percent of students borrow to finance their education, and on average, students leave school $141,566 in the red, before interest.[1] Even on the standard New York biglaw starting salary ($160,000), this will take years and years to pay off, especially given New York's high cost of living.

Accepted students should apply for financial aid by March 1.

Columbia offers a Loan Repayment Assistance Program to enable students to pursue careers in public service. More information about Columbia's LRAP can be found at the school's website.

First-year students must enroll in predetermined required classes, and can expect class sizes to be large, usually above 100 students per class. After the first year, students are mostly free to choose their own courses, nearly half of which will contain less than 25 students. Columbia's student-to-faculty ratio is 8:1.

Located in Manhattan's ever-expanding Upper West Side, Columbia offers students an endless number of ways to pass their prized free time. The school is surrounded by restaurants, clubs, and bars of all varieties, and everything that New York City has to offer is accessible via a short ride on the subway. Also, because the law school is connected to the main campus of the university, law students have the opportunity to enjoy a "real" college campus in Manhattan.

All of this comes at a high price, however, as the cost of living for Columbia's law students is among the highest in the nation. The school estimates that the total cost of living for the 2013-2014 school year will be about $21,000-assuming you can find a nine-month lease on a $1,333-a-month apartment. 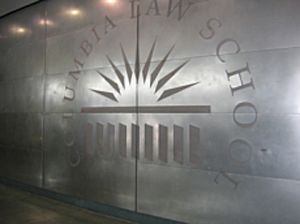 In the past, securing employment at top law firms has been likened to "shooting fish in a barrel" by some Columbia graduates. Now, however, it's not so easy.

Typically, many Columbia law students secure full-time jobs before they begin their third year at the law school. Often, students are offered employment with the same top firms at which they interned or worked during the summers after their first and second years. Of course, many of these employment opportunities are in the New York City area, as Columbia is often considered the premier school for job placement in the top law firms in the city.

But these days, entry-level biglaw hiring has been shrinking (including the traditional biglaw summer programs). Students should not assume they will get big-firm jobs, even from Columbia.

The bar exam rarely impedes Columbia grads, as nearly 95% of the school's graduates typically pass the exam on their first attempt (96.2% in New York in 2011, compared to a state average of 76.5%). Close to 70% of Columbia grads stay in New York after graduation, and California and Washington, D.C., each take around 7% of the class. A little under 8% of the class of 2012 obtained coveted federal judicial clerkships.