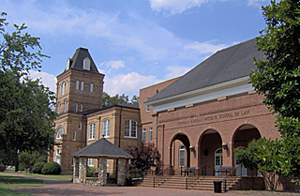 Campbell University, Norman Adrian Wiggins School of Law was founded in 1976. As a small Christian law school, Campbell says its size is a choice that exemplifies its belief in quality over quantity. The law school recently moved to new facilities in Raleigh, N.C., an upgrade from its former location in rural Buies Creek. It is now the only law school in the state's capital.

Incoming students in 2009 sported median GPAs and LSAT scores of 3.37 and 156. In that year, Campbell accepted about 30 percent of 1,514 applicants. Of the 460 people accepted, 159 enrolled. Current Campbell students say that an on-campus interview is mandatory for all applicants seeking admission to the law school. The students say the interview is a welcome change from other programs that will admit or deny you before they get to know you.

Full-time annual tuition at Campbell University School of Law is $30,850. Approximately 27 percent of students receive some form of grant, with the median at $14,250 per recipient. Students at Campbell graduate with around $109,000 of law-school related debt. Campbell does not offer a loan repayment assistance program.

Campbell University has a typical first-year section size of 40. The law school has 30 faculty members and a student-to-faculty ratio of 18.9 to 1. Students describe the curriculum as tough, citing heavy use of the Socratic Method and a requirement that students prepare thoroughly for each class.

First-year students are required to take the usual first-year courses, including torts, contracts, property, criminal law and legal writing. Grading is not done on a traditional 4.0 scale but is measured out of a score of 100. A student who scores above a 75 is said to have met the same standards a competent lawyer would meet. Grading also adheres to a strict curve which tends to make Campbell more competitive. The difficult curve causes nearly 11 percent of students to leave Campbell after their first year.

Campbell students expect their quality of life to greatly increase due to the recent relocation to downtown Raleigh. Living in the downtown area of a state capital offers many more options, for both entertainment and housing, than are available in pastoral Buies Creek. Benefits to the law school's new location go beyond state of the art facilities, as Raleigh contains courts, law firms, government and private agencies within minutes from the new building.

The median salary for Campbell graduates is $52,000 in the private sector and $43,000 in the public sector. Nearly 94 percent of 2008 graduates were known to be employed nine months after graduation, an impressive statistic for a Tier 4 school. Most students work in North Carolina after graduation, while the rest opt to work in one of the nearby South Atlantic states.

Students at Campbell maintain that the school is regionally recognized but virtually unknown outside of North Carolina and the South Atlantic states. Students also say gaining employment at large firms is difficult because of competition from schools like Wake Forest, UNC, and Duke. Employment at smaller and medium-size firms in North Carolina, however, should not present too much difficulty for a Campbell graduate.

Students fare extremely well on the North Carolina bar, passing at a rate of about 95 percent. This rate is higher than the overall state passage rate of 82 percent and even beats out Duke (92 percent), Wake Forest (88 percent), and UNC (87 percent) a year earlier. This figure suggests that Campbell, which gears its classes towards bar preparation, is meeting its mission of quality over quantity in at least one respect.

Although Campbell is a Tier 4 school, factors indicate it does not face some of the same problems that other schools in this tier face. First, Campbell does not seem to have the same problems placing students in the workforce as other peer schools. Second, its bar passage rate and employment rates are above the norm for a Tier 4 school. Campbell students may find themselves heavily indebted without a realistic chance of a big-firm salary on graduation day, but this is the risk inherent in attending most law schools. For students considering Campbell as a serious option, it should come as good news that its academic reputation seems to be rising.