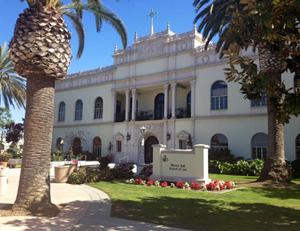 The prospect of attending law school in beautiful San Diego is enough to make many future-1L's giddy. Life in law school is not all fun in the sun, however; and the shaky career prospects faced by San Diego grads make the school's high cost of attendance hard to justify-though there are many lawyers out there doing quite well with a San Diego law degree.

San Diego also accepts applicants on a part-time basis. As should be expected, the admissions standards are less demanding compared to those for part-time students. 49% of applicants were accepted to the part time program last year. Those admitted had GPA's ranging from 3.04 to 3.39 for the 25th to 75th percentiles, and LSAT scores which ranged from 156 to 158.

Cost of attendance for San Diego students is high. Many, in fact, would say that the school is overpriced. Full-time students paid almost $39,800 for 2009-2010 in tuition alone. Combine that with an estimated room & board cost and on books and miscellaneous fees, and full-time students are looking at a price-tag of over $60,000 per year. One should look closely at the career prospects for San Diego graduates before deciding to invest the requisite total of approximately $180,000.

It should be noted, however, that San Diego has one of the more generous Financial Aid departments in the country. A whopping 20% of students received grants greater than or equal to half the cost of tuition last year, while 3% received grants covering the full tuition or more. What's more, the median grant for full-time students was a stellar $18,000. These numbers should encourage students with strong numbers to apply to San Diego and be diligent in their hunt for aid.

How do San Diego grads do after taking the bar? It is hard to say. The school does not report the percentage of students employed at graduation. One might suspect that this number must not reflect well on the school and it is for that reason that it is not reported. San Diego does report its percentage of graduates employed nine months after graduation however: 91%. This is a mediocre number, and speaks to the competition created by the plethora of law schools turning out graduates in California.

San Diego is a regional school, meaning that the majority of its graduates find work in and around the region the school is located in. While some students may choose to stay local and enjoy the warm weather of Southern California, the reality is that most San Diego grads would struggle to find jobs outside of California if they tried. Over 80% of students stayed in the state after graduation; and the remaining graduates did not go very far. In fact, less than 5% of graduates found work east of the Mississippi River.

San Diego places a very high number of graduates in private practice: roughly 55%. The rest are divided among the business sector (18%), government jobs (13%), judicial clerkships (4%), and public interest careers (6%). As is almost always the case, those in the private sector enjoyed the highest starting salary, earning $96,000 on average. Those in public service started with an average of $60,000, which is high relative to that of almost every other law school in the country.

Ranked 61st among U.S. law schools, one would be unwise to expect San Diego to lead the pack academically. Certainly, the school has its strong points-such as a top-20 tax law program-but overall, the San Diego does not prove itself to be an outstanding institution.

This does not mean, however, that one cannot have a well-rounded legal education serving as the foundation for a wonderful legal career. To the contrary, that is exactly the possibility that San Diego provides. The school offers numerous clinical programs and law centers-such as that on Public Interest Law, Children's Advocacy, and Energy Policy-that not only allow students to study closely some of the most pressing issues facing California and the rest of the country, but also provide them with the practical experience necessary to take on such issues in a legal capacity. Students can also gain experience by joining the school's Mock Trial team, which is often ranked as among the finest in the nation.

It seems safe to conclude then, that while, like other schools similarly ranked, San Diego fails to be known as especially strong in any particular field of law, students who take advantage of the school's many resources will be well-positioned for a long and successful career. 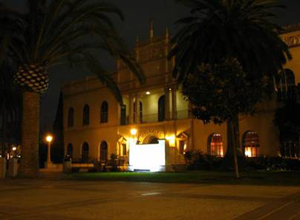 Students interviewed by the Princeton Review report that the student-body is generally a conservative bunch, focused on those fields of law that will yield the big bucks. This is surely something to keep in mind-both for students who would prefer such a campus-culture and for those would rather surround themselves with more public-interest-minded law students.

Looking off-campus, San Diego is a wonderful city for students. As far as night-life is concerned, San Diego is known to have a lively bar scene populated by a young and fun cohort. This should provide a welcomed getaway for students who can find the time.

Social-life at San Diego is not dominated by the drinking culture, though
. as is the case at many other law schools around the country. The surrounding area offers plenty of opportunities to get out and play. Whether running, biking, climbing, or swimming, students can take advantage of warm weather and natural playgrounds that Southern California has to offer. One must keep in mind, however, that law students are not known for an excess of free time allowing them to get out and enjoy the outdoors.

In the end, it seems that San Diego Law would be a perfect fit for any student interested in staying in the San Diego area and working in private practice (especially tax-law). Tuition is high, however, and prospective students should keep the school's poor employment rates in mind before sending in that seat deposit.