So I'm both Native American and Caucasian and I have some questions about my application for the 2019/2020 cycle. I'll be selecting both races on my application since I've always identified that way and I feel most comfortable doing that. I have a tribal number and ID, I've also received tribal scholarships throughout the past 4 years of undergrad, so I'm hoping that will be enough for the admissions committee. I have a 3.93 GPA and a 163 LSAT. My target school is Northwestern but I'm open to a lot of schools in the T20. Would you all think its an issue that I identify as both NA and Caucasian? Additionally, how do you all feel about my chances in the T14? Thanks!
Top

Re: Question on URM status

You're still a URM. But if you don't have an "obviously" Native American name/surname (e.g., your name's something along the lines of John Smith), then you should write a diversity statement discussing your Native American heritage and how it's shaped your experiences. 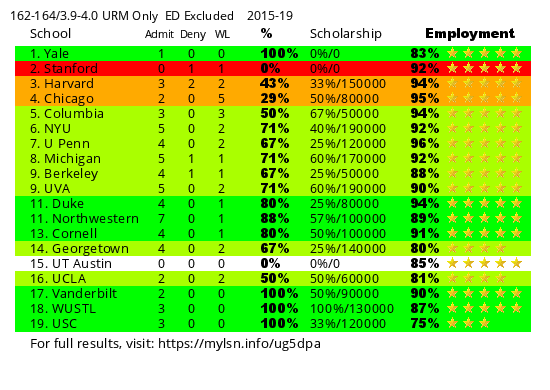 While the data is somewhat limited, it looks like you have a great shot from NYU and down. (I'd ignore the single Yale data point unless you have tremendous softs.) I'd apply to every school from NYU through Cornell, and then at least a few of the T20s depending on where you want to practice (e.g., if you don't want to work in CA, then exclude UCLA/USC; if you don't want to work in TX, exclude UT). Chicago and Columbia may be worth a shot but even if you get in, it will probably make a lot more sense to choose a "lower" T13 with $. Also, make sure to apply early for best results (i.e., before December - that means getting everything in before December, including letters of recommendation).

Re: Question on URM status

Thank you so much! I really appreciate your insight.
Top
Post Reply
3 posts • Page 1 of 1