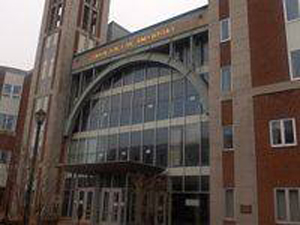 While prospective students often have doubts about its location, Rutgers-Newark School of Law is attractive for offering low tuition while opening the door to high salary opportunities in the New York and New Jersey markets. And, in fact, its Newark location can even be an advantage because it is surrounded by major New Jersey courts and law firms and provides connectivity to New York City.  Newark has more than its fair share of problems, but its proximity to legal markets is hard to rival.

Admissions standards at Rutgers-Newark are slightly lower than those of its sister-school in Camden. The Princeton Review gives the school an "Admissions Selectivity Rating" of 84 out of a possible 100. Roughly 29% (863 out of 2,893) of applicants were granted admission last year. For those who were admitted, the 25th to 75th percentile GPA range was 2.99-3.56 and the range for the LSAT was 155-160-with medians hovering around 3.3 and 158, respectively.

Most people are delightfully surprised to learn that Rutgers is a state-institution. As a result, in-state students enjoy a healthy discount. Last year, New Jersey residents paid $21,302, while out-of-staters paid $30,307. On-campus housing for up to 12-month terms ranges from 8,600 to $10,500 (in a newer dorm two blocks from the law school). Out-of-state students can easily expect to spend over $40,000 per year, however, the school is known to waive out-of-state status even for first year students who move to New Jersey. Thus, only students who commute from New York will be considered "out of state." While tuition is low, so is the amount of financial aid generally received by Rutgers-Newark students. The 75th percentile grant was $6,000 last year, while the median was $4,000 and the 25th percentile was $2,500. On the plus side, there is a loan repayment assistance program (LRAP) in place.

USNews reports that 80% of Rutgers-Newark graduates pass the Bar the on their first try, just beating the state-wide passage rate of 79%. This is a fairly weak passage rate; and so it is not surprising that about the same amount of students (82%) are employed at the time of graduation. Within nine months, however, 95% of Rutgers-Newark graduates are employed. This is a testament to the strength of the Rutgers brand throughout the state of New Jersey, where the majority of Rutgers-Newark graduates (63%) are employed. It may seem like a Rutgers-Newark degree is quite exportable, as 37% of graduates end up practicing outside of New Jersey. Further analysis reveals, however, that almost all of those who find work outside of the state end up in Philadelphia or New York, two cities that share borders with New Jersey. A few students (4%) found work south of the Mason Dixon Line, and some (1%) ended up in New England; but Rutgers-Newark is, and will remain to be, a regional law school. Prospective students should keep this in mind as they decide where to attend.

While Rutgers-Newark graduates may not be represented all over the country, they are represented in almost every field of law. Consistent with nationwide trends, more Rutgers-Newark graduates (43%) work in private practice than in any other field. Judicial clerkships are also quite popular, employing 31% of RU-Newark grads, while 15% went to work in business. The remaining graduates generally divide themselves among public-interest, academic and military jobs. One look at starting salaries reveals the reasoning behind the popularity of private practice work among RU-Newark graduates: those who enter private practice enjoy a median starting salary of $115,000-quite a high figure compared to that of schools similarly ranked to Rutgers. Such a high salary is most likely a result of the healthy legal markets in New Jersey, Philadelphia and New York.

Rutgers-Newark provides an academic experience that is ample with opportunity; it is the type of opportunity however that must be sought after. Whereas top-14 schools are full of nationally-ranked programs and students are heavily recruited for internships and jobs, Rutgers-Newark has few outstanding programs. The school does have a strong clinical training program, however (ranked 28th in the nation by USNews); and this program, combined with the school's proximity to New York City, Trenton (home of New Jersey's State government), and Newark itself provides students with the type of training and opportunity that can lead to a wonderful career in law. It should be noted, however, that when it comes time to apply for internships and jobs in the New York and Trenton areas, competition may be fierce. Positions in the New York area are some of the most sought-after in the nation, if not the world.

Students brag about the school's "excellent and approachable" faculty and "remarkable" new library (nine years old). A 2L had this to say: "for pretty much every resource I have needed, I have had no trouble finding it… the faculty and the administration are relentlessly helpful, and this has had a big effect on my experience here so far".

Adding to the list of commonalities between the two Rutgers Law schools, the Newark campus, like its counterpart in Camden, is located in a city with a bad reputation. Nonetheless, a significant rate of 1Ls live on or near campus, and students report that the social dynamic at the law campus is still strong. Newark's leadership, and Rutgers-Newark itself, has claimed a resurgence of sorts in parts of their city, and this provides students with options for dining, drinking and entertainment opportunities in their free time rime. Unlike some urban law schools, Rutgers is located directly on the campus of its parent school.

Students are able to get out and enjoy nearby Hoboken, where there is a growing population of young professionals and night-life, mostly revolving around local happy-hours. Some students, especially upperclassmen, enjoy the 15-20 minute train, bus, or car commute from that and other nearby North Jersey cities. Students also always have the option of hopping over to New York City for a weekend, which offers infinitely more opportunities for social life and fun.

As far as life on campus is concerned, competition seems to be moderate, if not low, and this helps to create a less stressful environment. As one student put it, "Competition exists… but not so much in the classroom as in the hunt for jobs".

Certainly the school has its setbacks-such as being tied to the government state for part of its funding. But Rutgers-Newark is a gem of a prospect for any student hoping to enter private-practice in the Mid-Atlantic region.