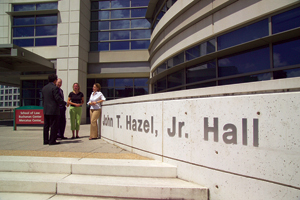 George Mason University School of Law, located just outside of Washington, D.C. in Arlington Virginia, has plenty to offer its students.  Between its increasingly strong regional reputation, fantastic career prospects, and incredibly low tuition, the school deserves an inquiry from any student who doesn't mind a conservative reputation and limited national mobility.

Difficulty of admission to George Mason School of Law is comparable to that of most other schools in the 30-40 range-competitive, yet reasonable. The Princeton Review gives the school an "Admissions Selectivity Rating" of 92 out of a possible 100. Of the 5,273 applications received last year, 25%, or roughly 1,300 applicants were offered admission. Of those admitted to the class of 2008, the 25th to 75th percentile GPA range was 3.31-3.79; the range for the LSAT was 160-165.

Seats are also available for those interested in pursuing their studies on a part-time basis.  As would be expected, admissions standards are generally lower for part-time students. For the class of 2008, the GPA range for the part-time program was 3.27-3.73, and the LSAT range was 158-163. Of 1,747 hopefuls who applied, 147 were admitted.

Tuition at George Mason is wonderfully cheap, and it is undoubtedly a selling point for potential students. Last year, in-state students paid only $20,556, while non-VA residents were charged a still cheap $34,220. Due to such low tuition, the financial aid office is not terribly generous. Only thirteen percent of full-time students receive tuition grants, and only seven percent of part-time students do. For both, the median grant amount was $10,000.

Most GMU grads take their Bar in Virginia.  At around 87%, the school's passage rate is respectable but not incredibly high. One would be mistaken, though, to assume that this is indicative of weak career placement for Mason alumni.  In fact, career prospects are quite good upon graduation. According to US News, over 99% of grads have employment secured at the time of graduation. The majority of grads went on to practice at private law firms, but it is worth noting that GMU places an unusually high percentage (16) of its students in government work. Others find employment in business and public service, and roughly 13% of graduates secured prestigious judicial clerkships.

Where are these jobs found? Well, the converse of the school's strong regional reputation is its weak national placement. Almost 90% of grads stayed in the Southern/Mid-Atlantic region, according to the Princeton Review.  This does not necessarily mean that each of those graduates was restricted to the area; but a number as high as 90% is hard to ignore. No other region attracted more than 3% of George Mason Law School graduates. Regardless, most students on campus are well aware of this trend before coming to George Mason, and are happy to find employment in the surrounding area. 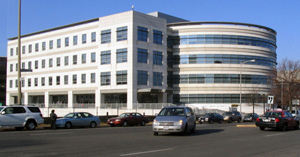 George Mason Law
Looking for a conservative law school located in the highly developed suburbs of Northern Virginia?  Then George Mason Law School is the school for you.  If you are not, then look elsewhere, as most students say that the school's conservative bias and Northern Virginia location permeate all facets of a GMU legal education.  This includes the lifestyle led by Law Students.  Many students are known to hold part-time jobs outside of class and one 1L claims that his entire class seems "perpetually busy" and not interested in "having any fun whatsoever."  Most students feel that the school is not overly-competitive, though, and they enjoy the sense of camaraderie that exists among the student body

Regarding social life, some complain, as did one 3L, that there isn't much to do in Arlington if you aren't satisfied with dividing all of your time between "the classroom and the bar scene."  While it seems to be true that social life is dominated by the drinking culture, most students seem to be able to find alternatives.  DC is not too far away, and there seem to be a plethora of school-sponsored events and student groups.  As will be true with most law schools, social life at George Mason can only be what its students make of it.  It seems that GMU gives its folks plenty to work with.

Curriculum and areas of expertise

George Mason Law School runs its curriculum on a semester-basis with the standard first-year curriculum.  Almost 200 courses are available to choose from beyond those required in the first year.

GMU is known to have a strong focus on research and legal writing, as well as technical methods. The law school is renowned for its expertise in Law and Economics, offering both a joint degree and an LLM with such a focus.  The school also offers students the opportunity to compliment their study with programs run by the Center for Law and Economics. The university has an excellent economics department, including two Economics Nobel Laureates as professors.  As an epicenter (along with the University of Chicago Law School) for law and economics, George Mason is a hotspot for educating judges and academics about the interrelationship between economic principles and legal doctrine.  Supreme Court Justice Ruth Bader Ginsburg once called the Center's programs "[M]ore intense than the Florida sun."

In addition to the Law and Economics program is the National Center for Technology and Law, programs of which would be a nice compliment to the school's many course offerings in Intellectual Property Law.  George Mason Law School benefits from the United States Patent and Trademark Office also being in Arlington.

Again, the low tuition, combined with the strong career prospects and regional reputation, undoubtedly make GMU a steal. This is especially true for students interested in the intersection of economics and law.  It behooves any and all potential applicants to visit the campus.  This is especially true for liberal students, or those who are looking for social life beyond the bar scene.  Most students, though, will be happy with what they find.

While George Mason is currently a regional law school, it is a law school on the rise as evident from it not being deemed a top 50 law school in the 2000 U.S. News law school rankings to continually rising each year and had been ranked in the top 35.  For the latest rankings, GMU took a dip to 41st, but the school is hoping to move back up by next April. As George Mason continues to build upon its strength in law and economics and solidify its reputation, its reputation will continue to spread.