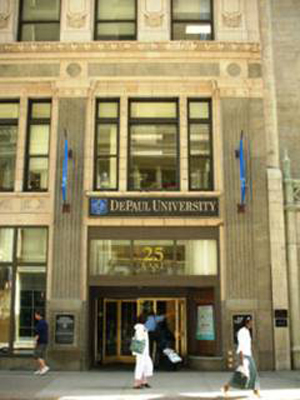 The DePaul University College of Law boasts nationally-ranked programs and a downtown-Chicago location. What's more, the school's alumni network is strong and the professors are well-respected in their fields. The school does have limitations however, including weak national placement and facilities that need updating.

DePaul also offers a part-time program, in an effort to meet the needs of working professionals in Chicago's urban atmosphere. Admissions standards are low compared to those for the full-time program.  In 2008, the GPA's for students admitted to the part-time program ranged from 2.96 to 3.49 for the 25th to 75th percentiles, while LSAT scores ranged from 154 to 157. DePaul typically accepts over 50% of applicants to its part-time program, and part-time students make up roughly 35% of the entering class.

The excitement experienced by those admitted to DePaul Law School may deteriorate once the total cost of attendance is calculated. Tuition itself is not shockingly high-at roughly $37,500 (full-time) per year, it is consistent with that of other private schools. The cost of room & board, however, is well above average. Both the Princeton Review and USNews give estimates of over $20,000 for room & board. Combine these figures with book costs and various miscellaneous fees, and the annual cost of a DePaul education climbs to approximately $60,000 per year, with a three-year total likely to top $180,000. Needless to say, prospective students should make every effort to maximize financial aid. Luckily, the financial aid office at DePaul is quite generous. For those receiving grants last year, the median amount was $14,000, while the 25th to 75th percentile range was $8,000 to $18,000, according to USNews.

Most DePaul University College of Law graduates take the Illinois Bar, as this is the state in which they are most likely to find work. The school's passage rate is a solid 88%, tying the state-wide passage rate. After taking the Bar, DePaul graduates do relatively well in their job search: 87% of graduates are employed at the time of graduation. These are strong figures when viewed relative to DePaul's ranking; but roughly 10% of DePaul graduates are unemployed nine months after graduation, providing further evidence of the correlation between a school's ranking and the need for students to graduate closer and closer to the top of their class in order to be guaranteed employment.

As for the fields of law preferred by DePaul graduates, private-practice is the runaway winner, employing over 60% of DePaul-trained attorneys.  Jobs in business are also a common choice, with 19% of graduates taking this route. Also popular are government and public-interest jobs, employing 12% and 5% of DePaul graduates, respectively. Judicial clerkships were not common, as only 1% of graduates pursued this option.

Without contest, those who entered the private sector earned the most, starting with an average annual salary of $68,000. Those in public service averaged $50,250 to start, which is quite high relative to averages in the field.

Located in the same city as powerhouses such as the University of Chicago and Northwestern, DePaul Law School holds its own when it comes to academics. The school's location attracts a knowledgeable and experienced faculty which undoubtedly boosts the academic experience. Perhaps this is why USNews ranks DePaul Law as 14th in the nation for Healthcare Law (tied with Harvard Law, of all schools) and 11th for Intellectual Property Law (tied with NYU and Michigan).

Outside of the classroom, DePaul's Chicago location provides seemingly endless opportunities for internships and summer jobs. What's more, the school is especially close to both the federal and the county courthouses; and the school's strong alumni network helps students lock down the types of positions they need to distinguish themselves from their peers.

Not all is to be praised at DePaul Law, however. Students interviewed by the Princeton Review complain of "terrible" classrooms that are "depressing" and "not spacious." The same students leveled several complaints against the career services center and the school's legal writing program.

Overall however, it seems that the pros of the DePaul University academic experience outweigh the cons.

As the school writes on its website, "Chicago is DePaul's campus". And any student with nothing to do in Chicago is simply not looking hard enough-better yet, they are probably not even opening their eyes.  With everything to offer from lakefront beaches to deep-dish pizza, Chicago is easily one of the most vibrant cities in the country. The music scene is diverse, the sports-culture is engaged, and nightlife is endless. Not much more needs to be said; DePaul simply offers one of the best atmospheres in the country-unless of course, you prefer warm weather.

DePaul Law School offers both sound academics and a vibrant and diverse social scene. The latter is more attractive than the former, however, and prospective students should be aware of the school's academic limitations.